Ever wonder how an animated story is developed? How is comes to life from script to storyboards to screen? I had a chance to sit down withDisney • Pixar's Finding Dory‘s Co-Director Angus MacLane and Story Supervisor Max Brace in Monterey last month to learn all about how an animation comes to life.

As a story supervisor, Brace leads the story team and helps directors realize their vision for the story. In addition, he casts story artists for specific sequences, reviews artists’ work, both individually and with the director, and guides the artists to understand and execute the director’s vision.

Brace and MacLane shared with us a bit about the Marine Life Institute (MLI) sequence and how they developed what would go into that MLI sequence, the types of things we would see as an audience in that environment. One of the things Brace mentioned was remembering the experience he had at an aquarium with his son and seeing the touch tank with all of the kids touching and poking and prodding the creatures, and he got to thinking, “What would it be like if Dory got stuck in the touch tank?” It would be awful. The script is the first draft of the movie.

That idea took traction and they moved forward with the touch pool idea and researched it. They photographed touch pools for reference and then started brainstorming with the story team to come up with what the story idea could look like. What might be in these scenes? The creatures are never getting out. What creatures live in the touch pool? Starfish live in the touch pool. What happens if they get their arms get ripped off? Maybe the fish are all shellshocked. What about the bay rays? Maybe they have lived there for so long they are used to it. In real life, some of the creatures actually need to be pulled out to take a break (that's a real thing). So Hank and Dory end up in some funny situations that the animators create based on reality and humor. They then organize their ideas and hand them off to the writer to write the scene.

An artist gets assigned to a sequence and then talks to the director and talks through the scene. Their job is the first one to direct the scene. They'll use a thumbnail template and then works out the composition of the shots, the acting, the lighting, the editing—they are essentially trying to translate the words into a visual representation of the story.

Brace then sat down and did some thumbnailing for us. It was so cool to see that creative process happen right before our eyes. The drawings are tiny and loose, just basic visuals. Then MacLane helped to improve the sequence from a director's standpoint and offered suggestions where they could improve the story and where things should be cut because they didn't flow well.

Then all the notes are compiled and sent off to editorial. While that process happens, the artists are recording scratch. This is when they record with temp voices for getting a sense of pacing and timing of the scene. This is the stage when there is music being brought in, sound effects, etc., and they start to bring together all of the components to work toward the cohesive, seamless movie you see as a final product.

Sometimes through this process, the team will end of up making big changes. This was one of those times. The team realized that they were so used to dealing with Dory as a sidekick, that she always ended up being the sidekick in a scene. Ultimately in this scene in the first draft, Dory was a sidekick, so the scene had to be redone to focus on Dory and not Hank. The scene initially was really about Hank and Dory was the sidekick. They had to rework the scene, but it's great.

Disney•Pixar’s Finding Dory reunites everyone’s favorite forgetful blue tang, Dory, with her friends Nemo and Marlin on a search for answers about her past. What can she remember? Who are her parents? And where did she learn to speak Whale? Finding Dory swims into theatres on June 17.

I’ve was invited to Monterey courtesy of Disney • Pixar for a media event. As always, all opinions are my own. 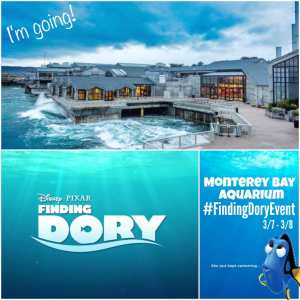 « Must-Have Mother’s Day Gifts
Best of the Blogosphere No. 68 »